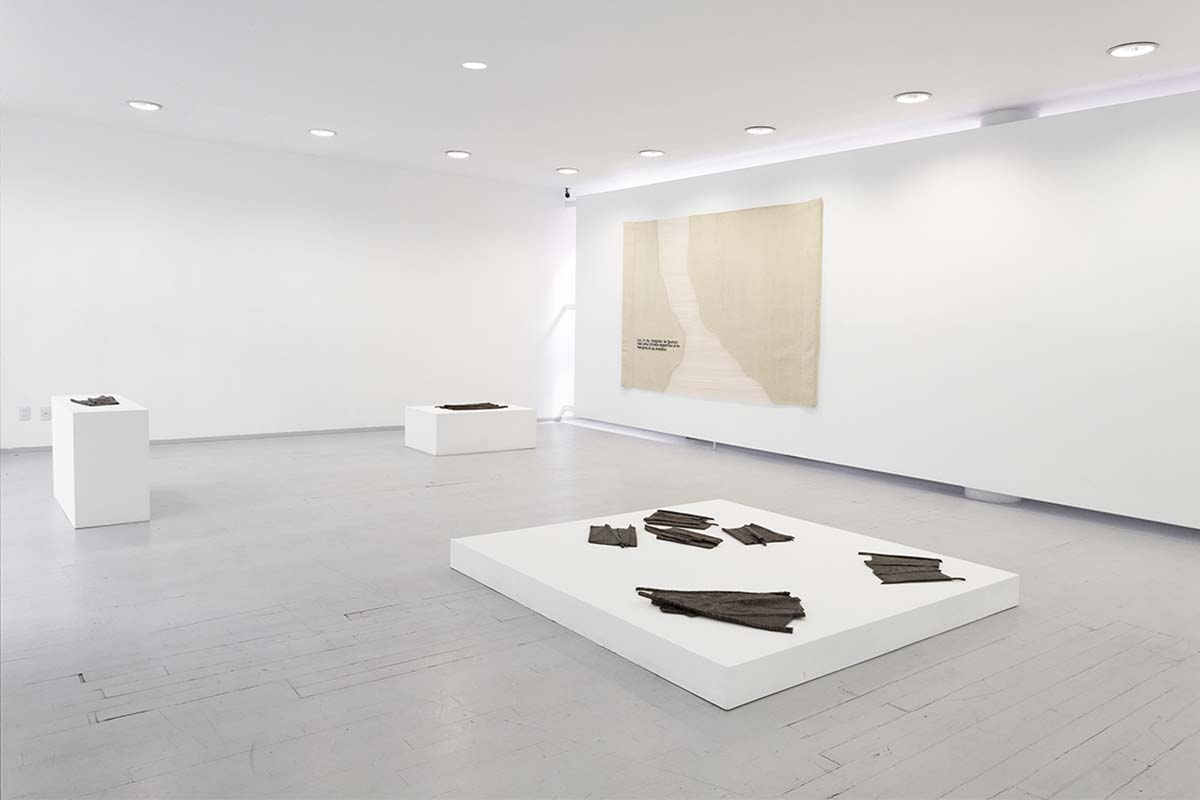 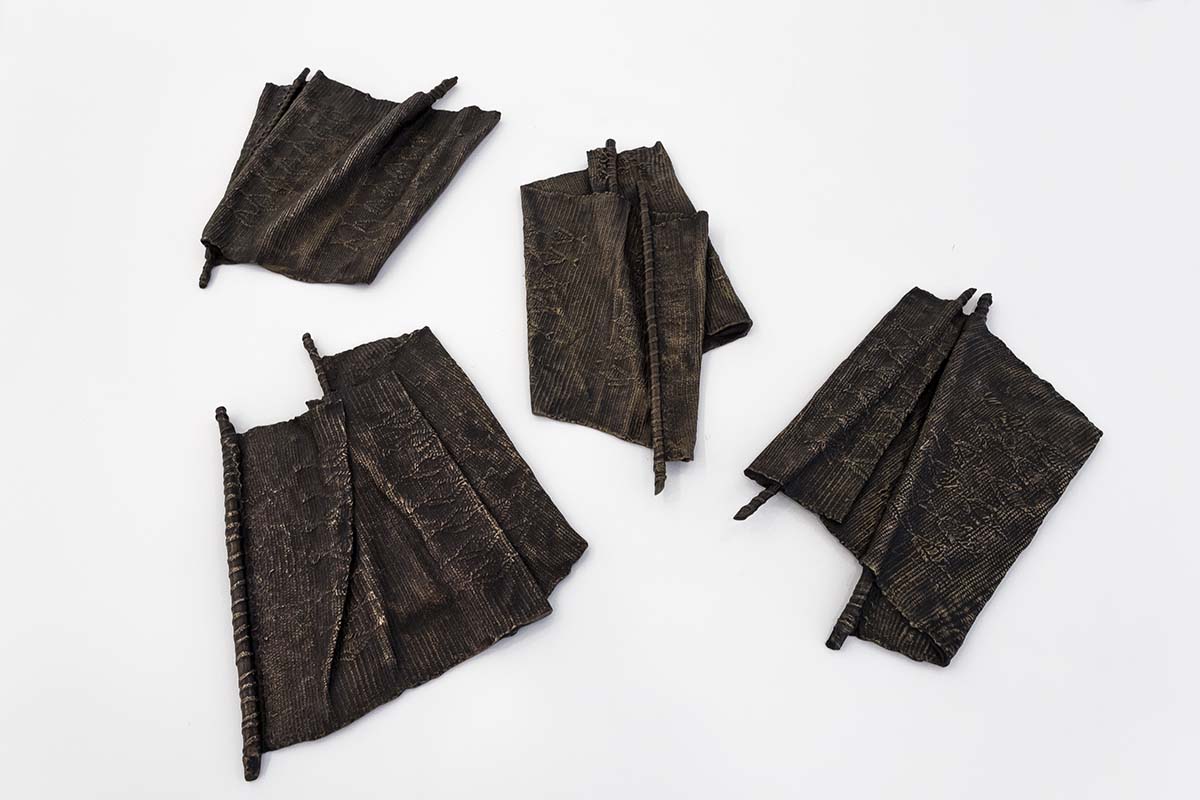 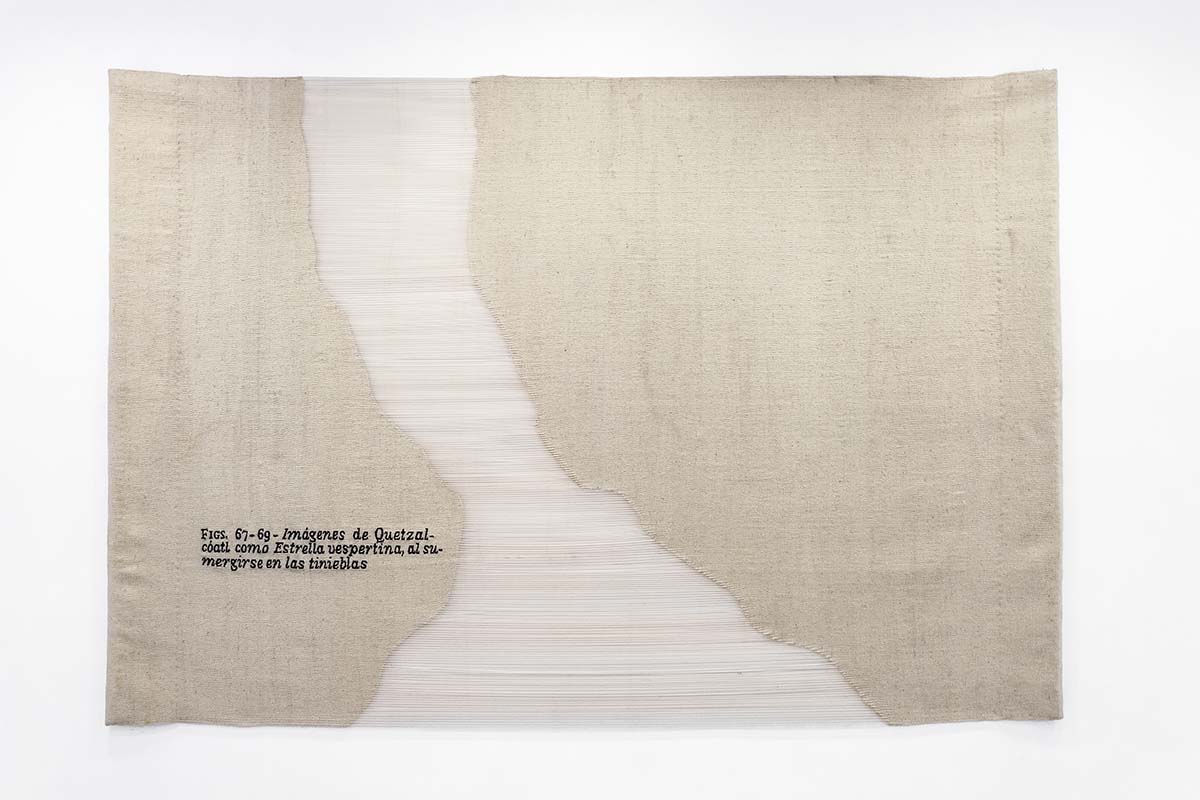 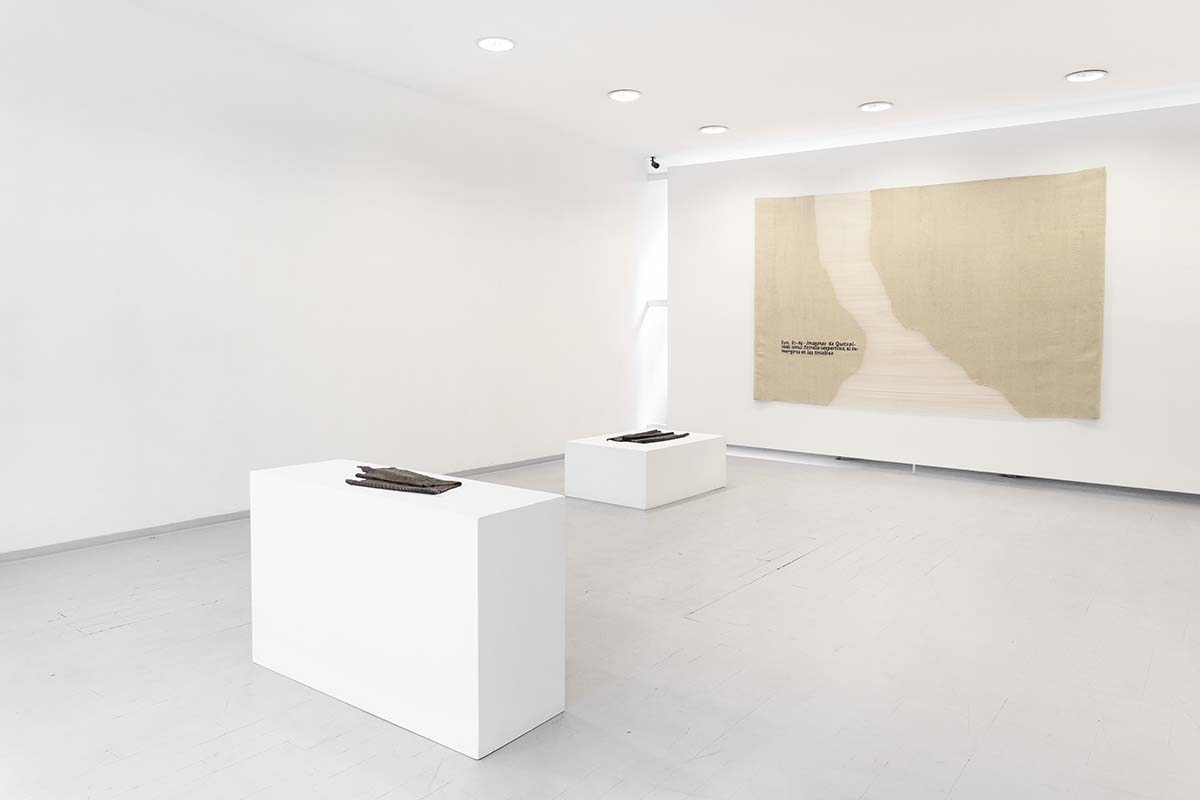 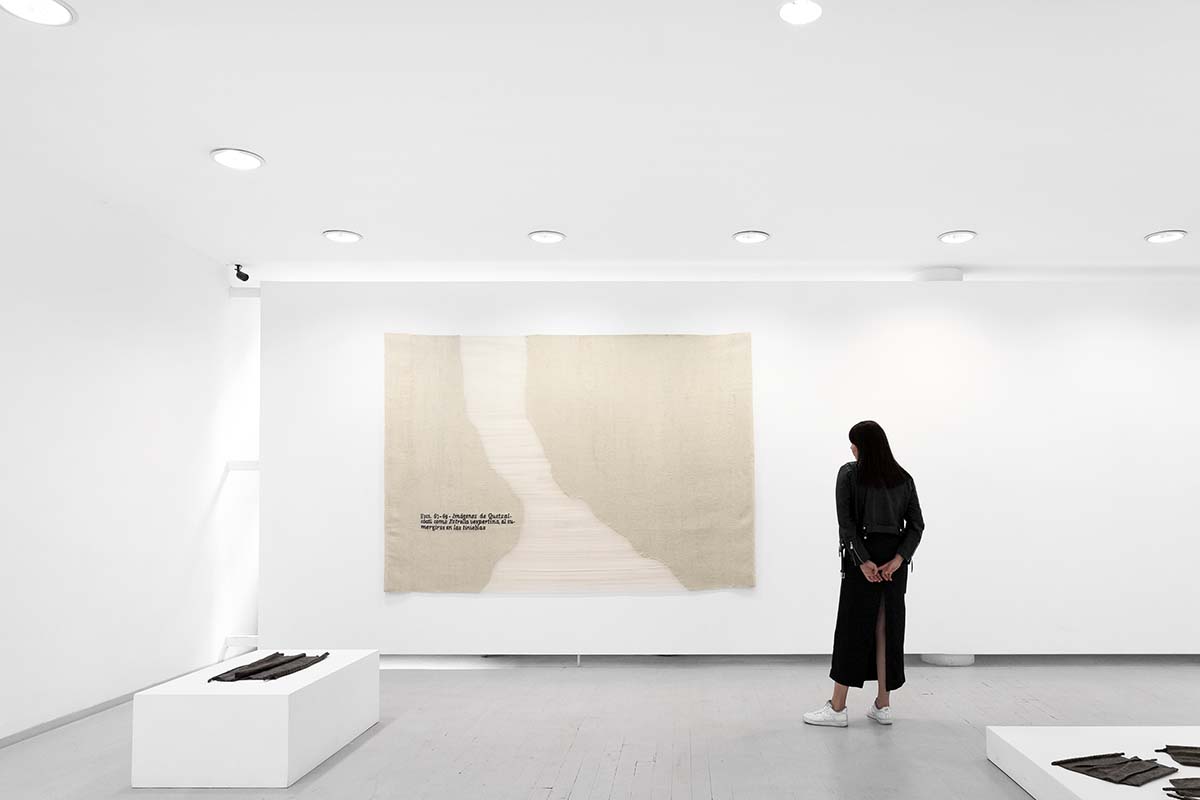 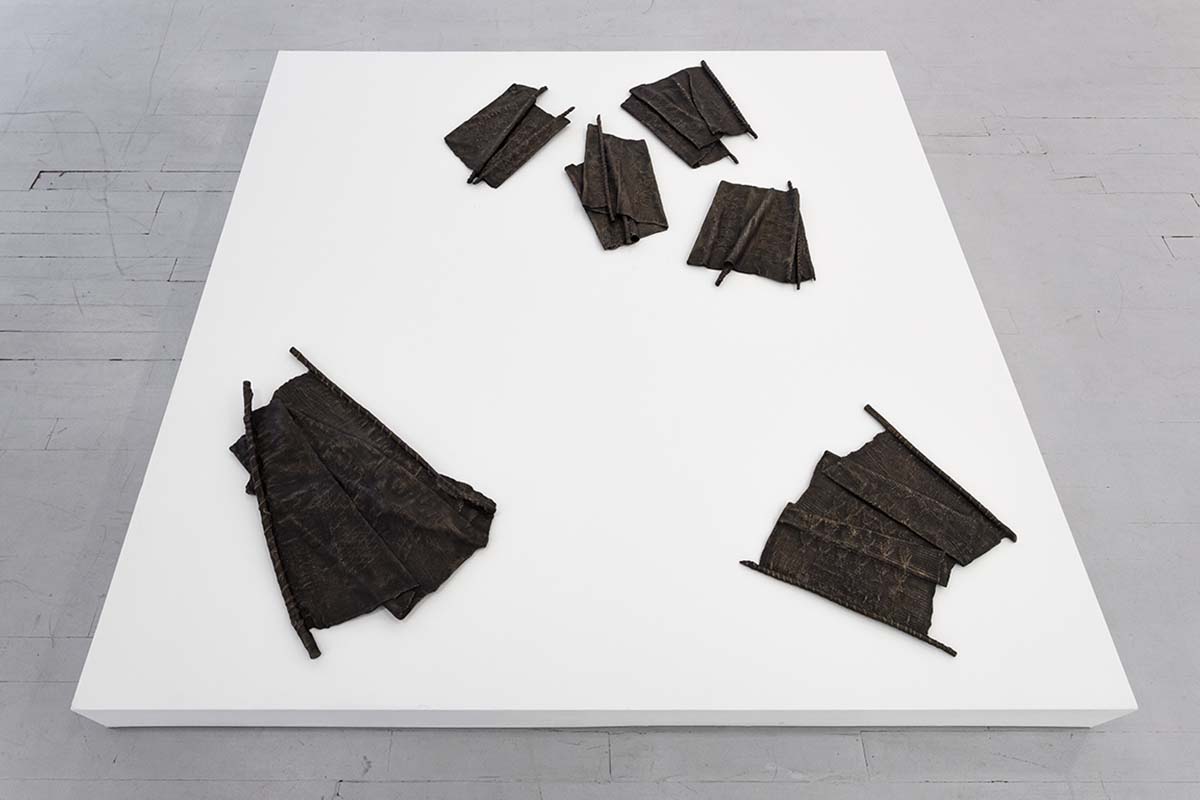 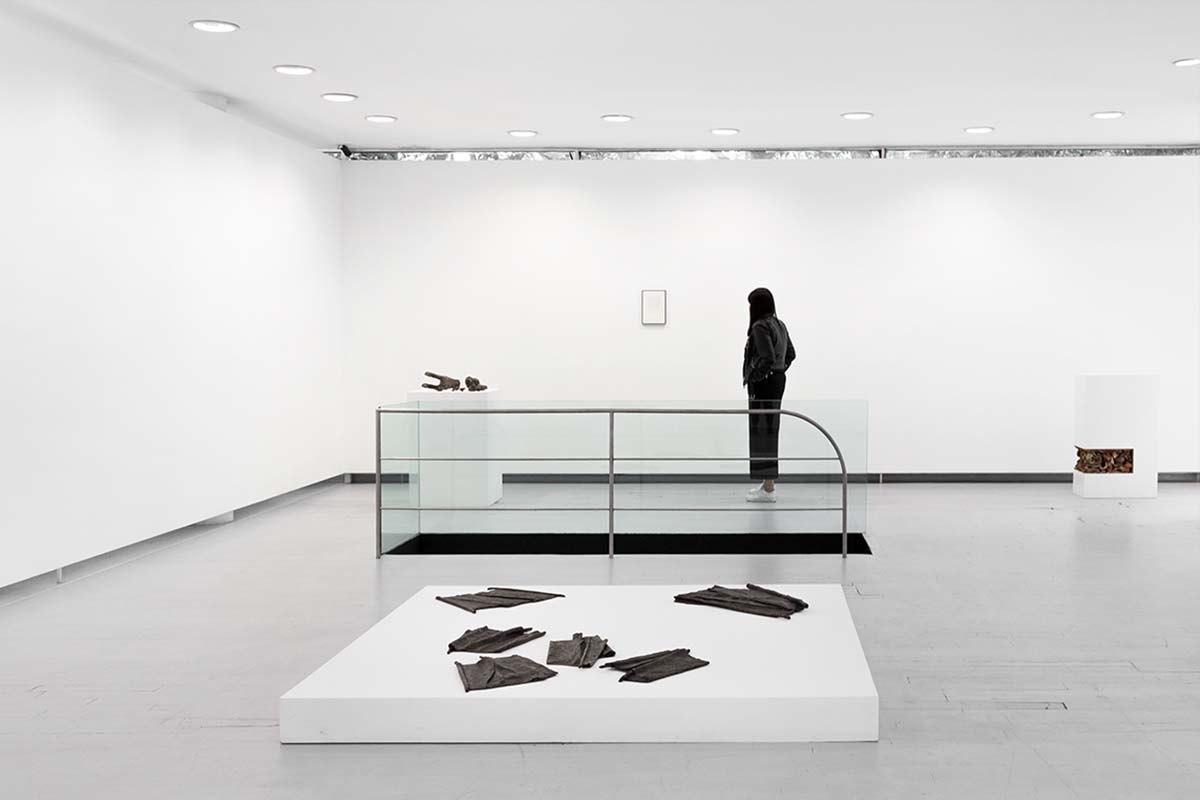 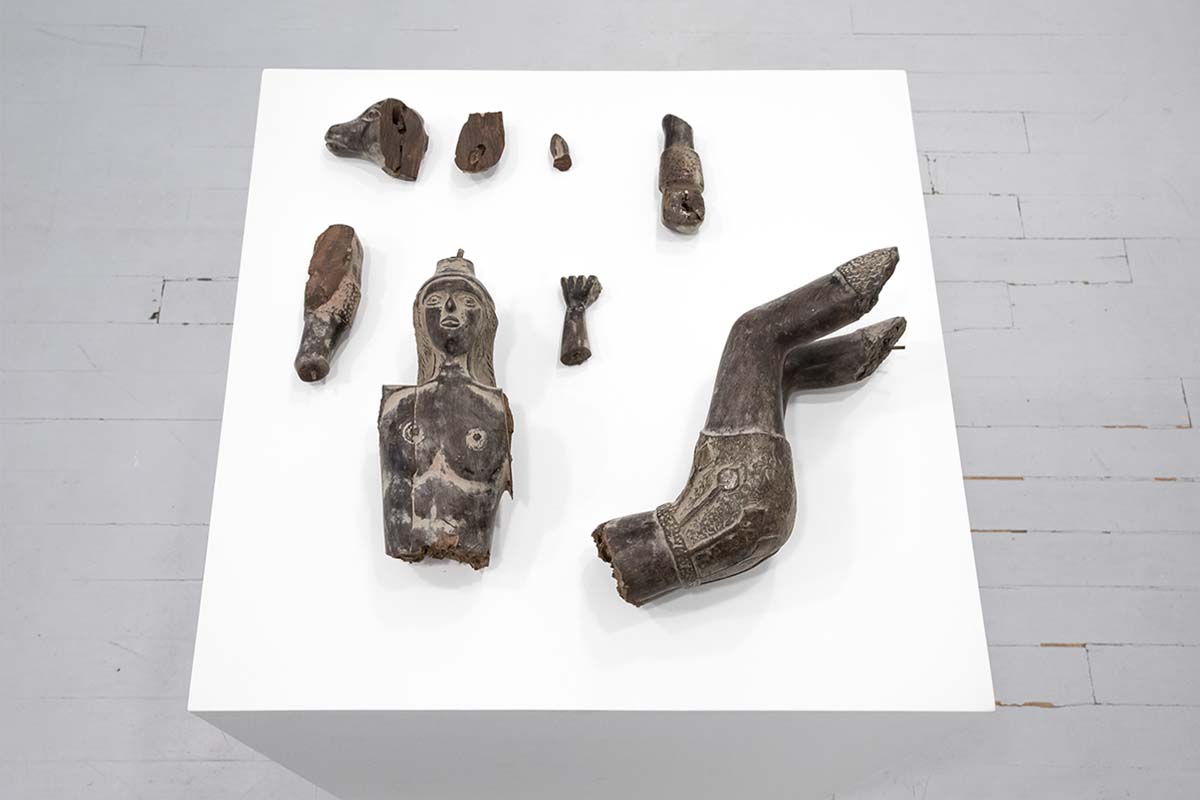 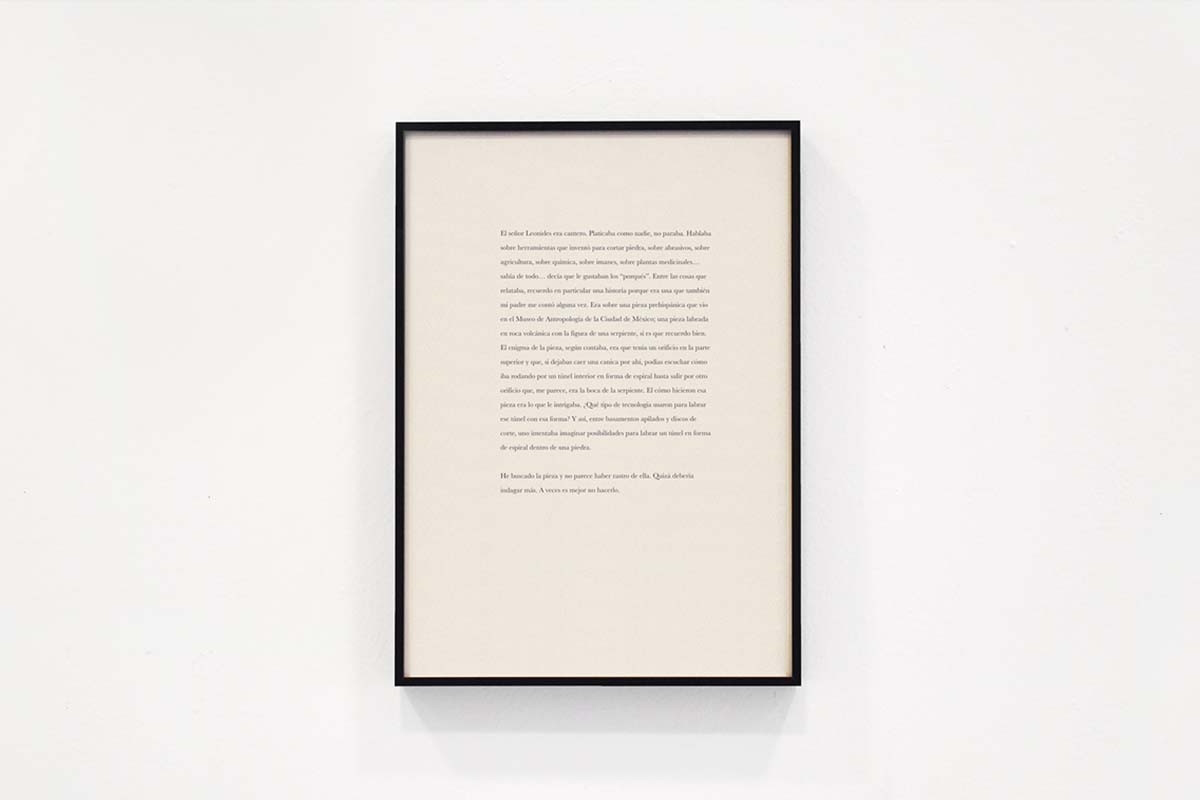 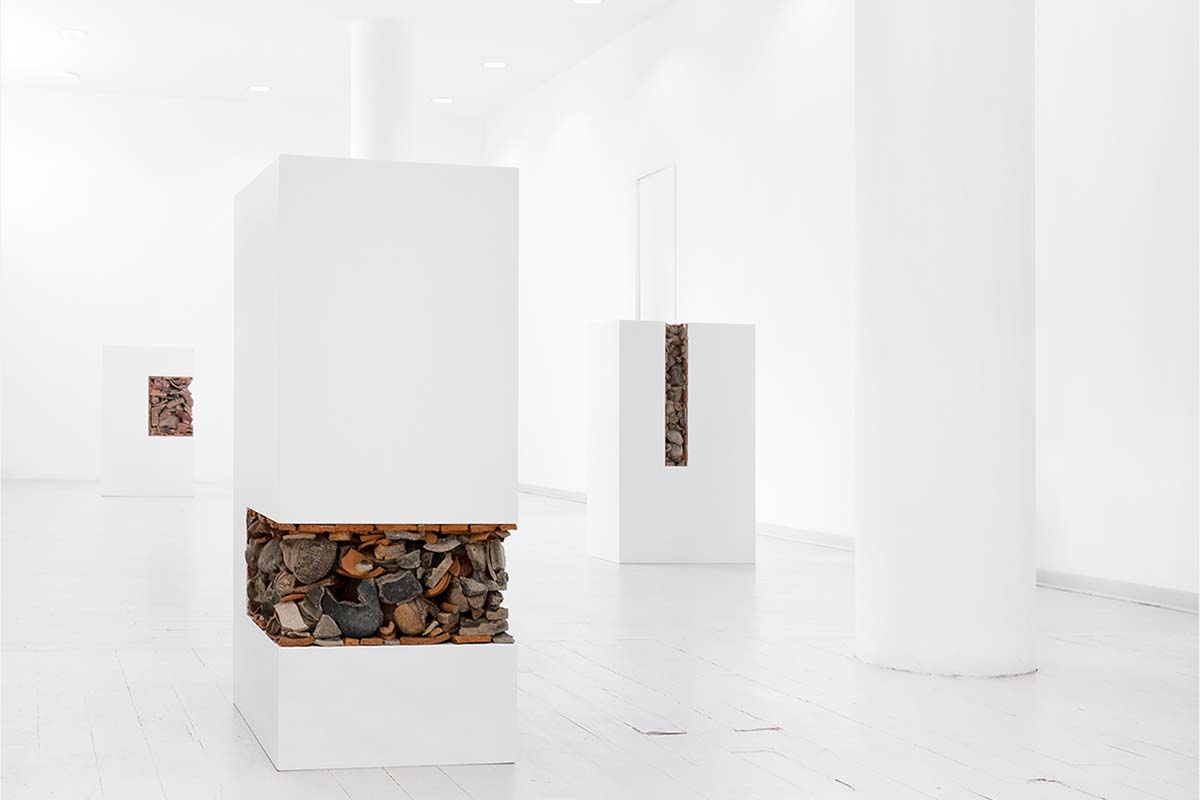 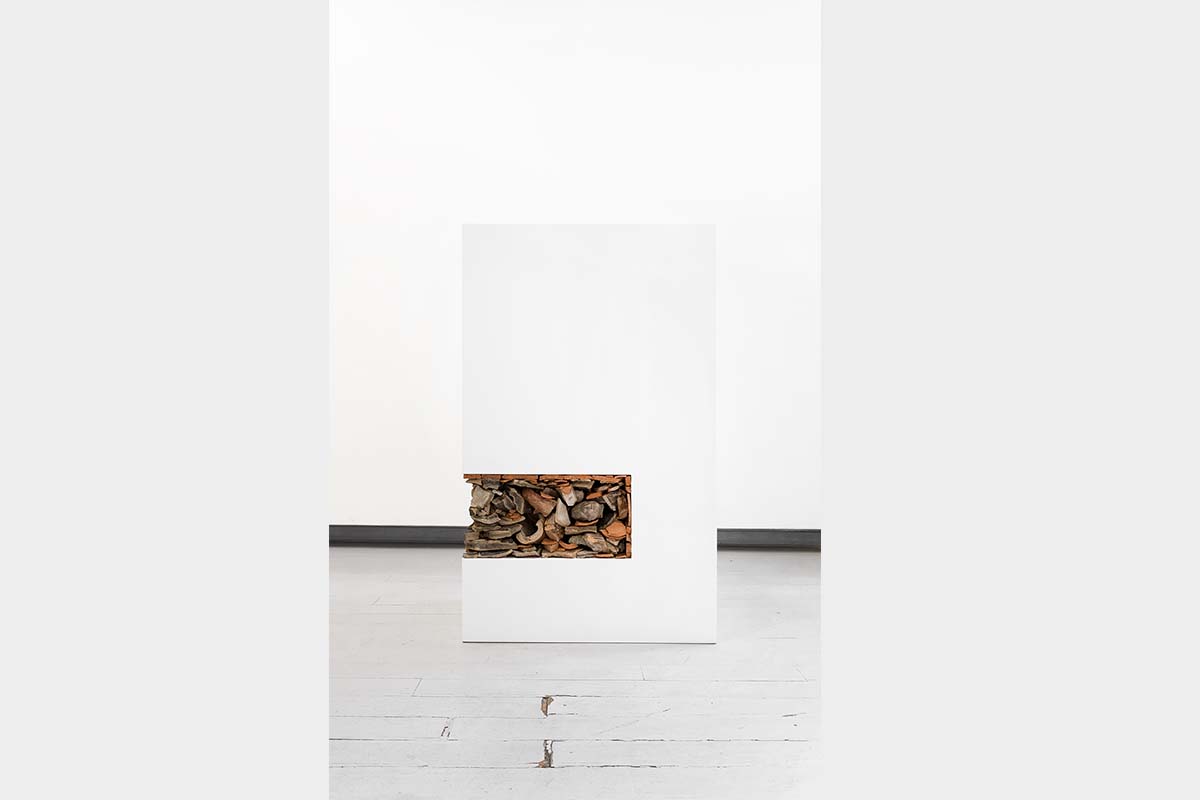 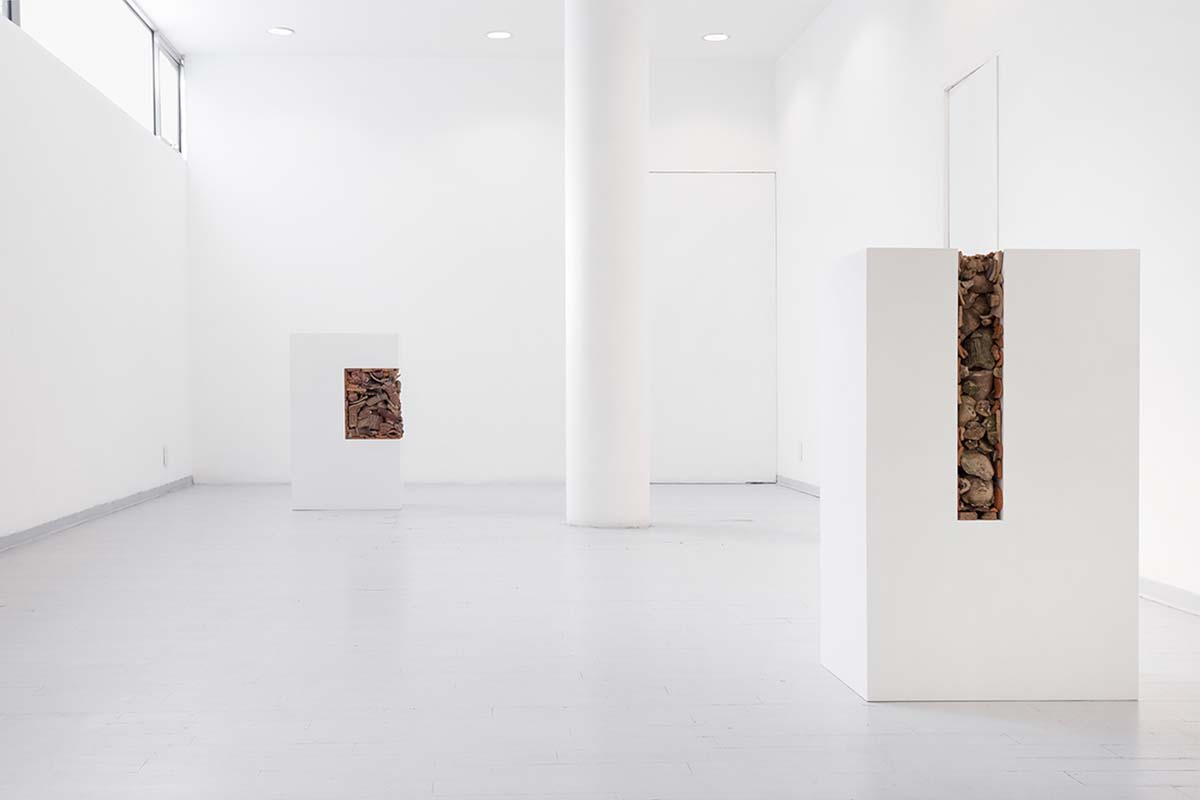 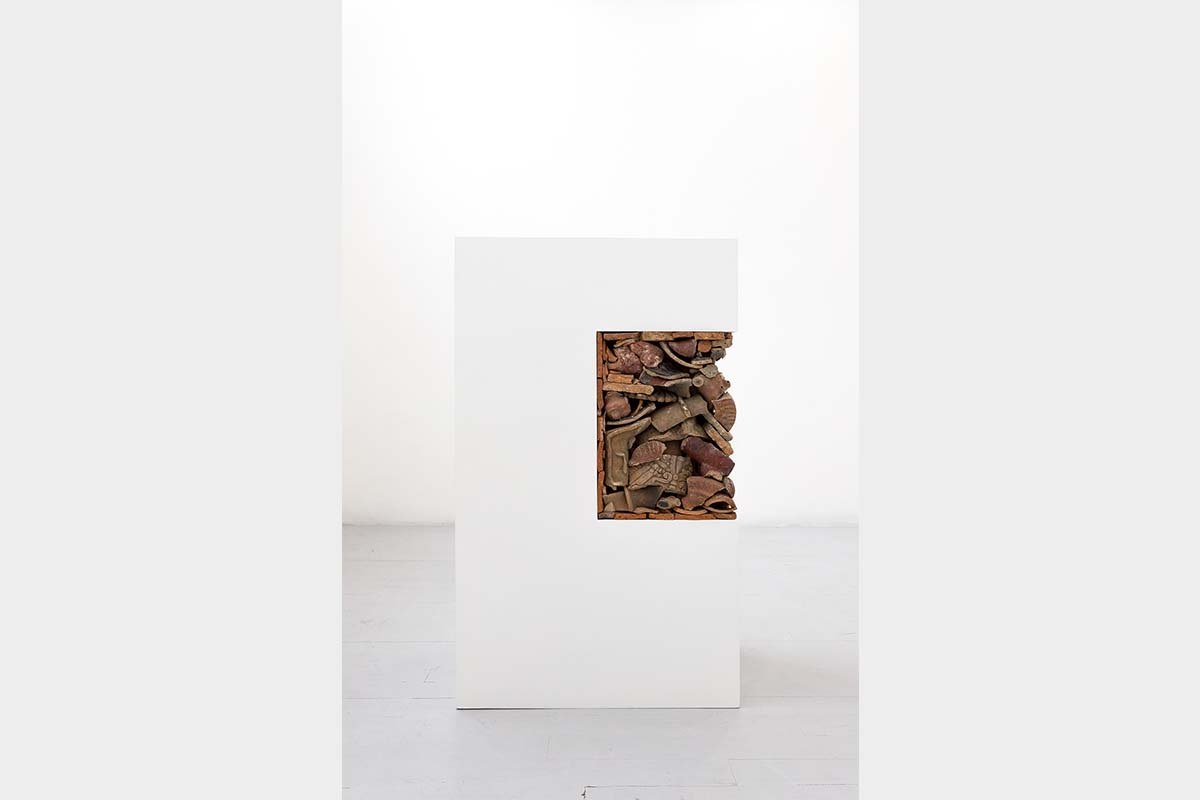 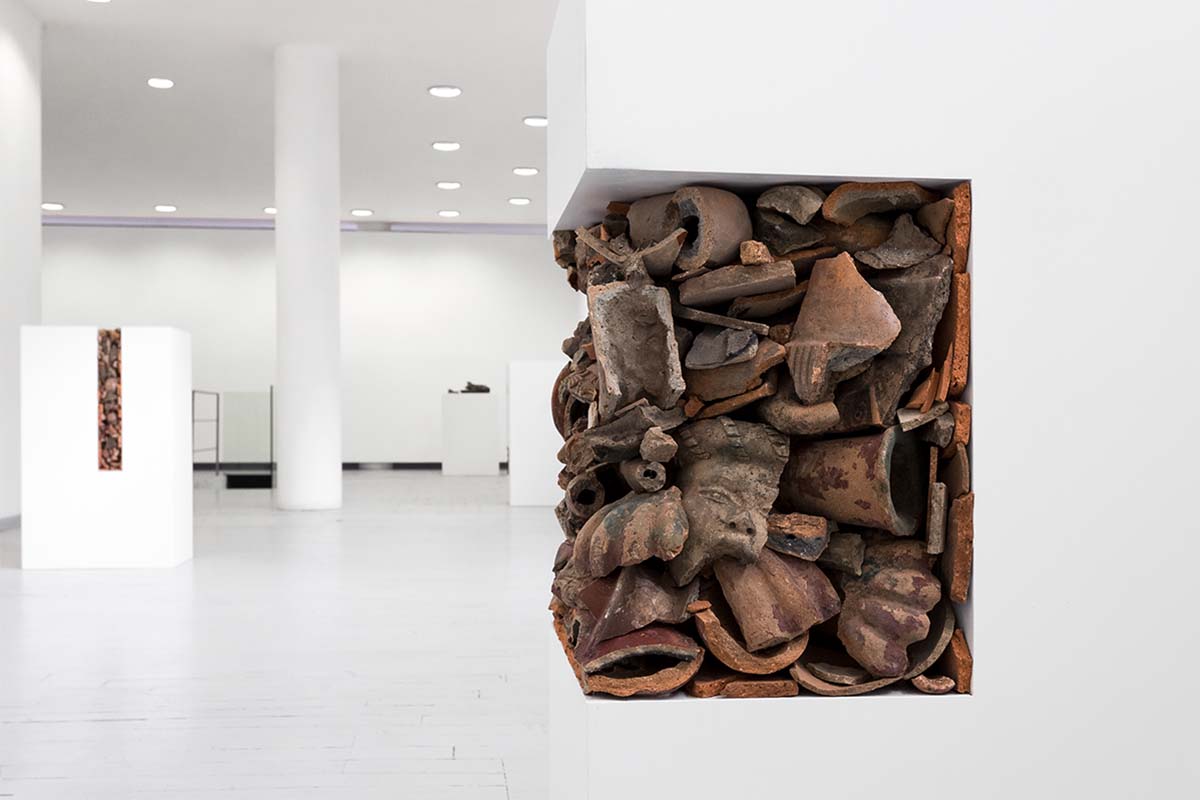 Is it true one really lives on earth?

Not forever on earth,

Only a little while here.

Though it be jade it falls apart,

Though it be gold it wears away,

Though it be quetzal plumage it is torn asunder.

Not forever on earth,

Only a little while here.

Cynthia Gutiérrez’s practice and production processes develop around the bridge connecting the past to the present. The thin line that divides memory from oblivion—that which endures, from that which vanishes— has become an essential figure for understanding her work. She uses those opposing concepts to start weaving new stories that fluctuate between the uncanny and reality, past and present, tragedy and comedy, truth and deceit.

All her works radiate a peculiar energy that oscillates between gravitas and a somewhat uncomfortable sense of humor. Certainly, she deals with serious issues: History with a capital H, symbols, Art, time, death, oblivion… but she de-mystifies those issues by—sometimes even literally—toppling them from their pedestals. Perhaps the pedestal is the defining element of her practice as a whole: in her works we find broken or slanted pedestals; pedestals sinking down or emerging from the ground; empty pedestals; miniature pedestals. All of these pedestals/foundations are always in a dialectical tension with their own function as that which limits and, therefore, defines what belongs to official history, to collective memory, and to art. That is why they are so interesting for an artist who repeatedly places them in precarious or unstable positions, thus challenging their physical or symbolic ability to keep on supporting something.

Gutierrez gives another twist to this dichotomy between this purported stability—this fixity represented by the pedestals—and ephemeral time through a recurring use of textile as support in her practice. In these cases, fluid, flexible, malleable textiles are almost the complementary opposite of the pedestal. All of the works in the No para siempre en la tierra exhibition are built from these two elements, which are then transformed and taken to the limits of their respective functions and definitions: the flow of fabric is forever frozen when cast in bronze, the pedestal now stores the fragments of a history that has been lost.

Everything in the exhibition is an allusion to the transitory nature of humankind and its histories, its myths and gods. And if it is true that the artist has resorted to classical iconography in her practice, it also consistently shows a relation to her local context in one way or another. In these recent works this relation becomes explicit starting from the title of the exhibition, which has been directly taken from a poem by Nezahualcoyotl. Of course, these lines are also universal insofar as they utter a concern for how fleeting our passage through the world is. Actually, in and of themselves the craft techniques used in her works speak of her concern for a world that is about to become extinct, of the effects that the introduction of the pedestal and bronze have on these practices and of the sediments of culture that we accumulate upon them and which, piece by piece, gradually configure a landscape of what we are, of what we could have been.